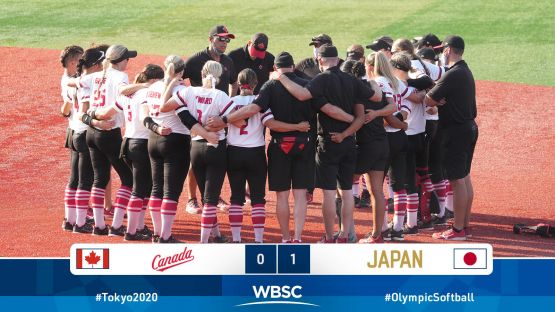 Yokohama, Japan – The Canadian Olympic Softball Team fought very hard but lost 1-0 in an extra inning against Japan at Yokohama Stadium. The narrow loss ended Canada’s hopes of competing for the gold medal, but the team still has a chance to make history as their focus will shift towards winning the bronze medal. Canada’s top Olympic Games finish was fourth in 2008.

Yukiko Ueno took to the pitcher’s circle for Japan, while Sara Groenewegen (Surrey, B.C.) started once again for Canada, with both pitchers holding their own in the early innings. After Ueno retired Canada in order with three groundouts, Groenewegen allowed a one-out single but was able to leave that runner stranded at second. Canada got into the hit column with a single by Jenn Salling (Port Coquitlam, B.C.) in the second, but she was doubled off at first on a line drive to the pitcher. Japan got a single in each of the second and third innings, but once again Groenewegen did a great job to keep them from scoring.

In the top of the fourth, Larissa Franklin (Maple Ridge, B.C.) lined a one-out single to left but she was thrown out at second after trying to move up on a pitch in the dirt. Kelsey Harshman (Delta, B.C.) also singled to left but the next batter grounded out. Canada’s best opportunity to score came in the top of the fifth, when Salling led off with a double over the centerfielder. A ground out to second moved Salling up to third, and after a hit by pitch put two runners on base, Ueno got an important strikeout then got the next batter to ground out back to her to keep Canada off the board.

In the bottom of the fifth, Jenna Caira (Toronto, Ont.) walked the first batter and the runner advanced to to second on a ground out to first by the next batter. Danielle Lawrie (Langley, B.C.) entered the game and induced a pair of groundouts to keep the game scoreless. Each team put a runner on base in the sixth, but neither was able to advance those runners further.

Miu Goto relieved Ueno in the seventh and struck out the side, allowing Japan to put a lot of pressure on Canada in the bottom of the seventh. They loaded the bases on a single, an error and an intentional walk with one out, but Lawrie did a great job pitching out of a jam, getting a line drive to second and forcing a fly out to first to send the game to extra innings.

With a runner starting on second base due to the international tie-breaker rule, Canada was unable to get anything going as Goto struck out the side once again. Then in the bottom of the eighth, Japan sacrificed their runner to third and Canada issued a pair of intentional walks to set up a force play at the plate. However, Eri Yamada lined a single to center to end the game.

Groenewegen pitched three scoreless innings for Canada, allowing three hits and one walk while striking out two, with Caira walking only one in an inning and a third. Lawrie took the hard-luck loss, allowing one unearned run three hits and three intentional walks over three innings. Salling had a double and a single for Canada with Franklin and Harshman each adding a single. Yamada had three hits for Japan.

The loss ended Canada’s hopes of playing in the gold medal game, dropping their record to 2-2 while Japan improved to 4-0. The United States also sit at 4-0 after edging Australia 2-1 in eight innings earlier in the day, meaning Japan and the United States will face each other in Tuesday’s gold medal game a day after they will play each other in their final game of the preliminary round on Monday.

Canada will close out its preliminary round scheduled against Italy (0-3) at 2:30pm JST on Monday (1:30am EDT), and a win would guarantee them a spot in Tuesday’s bronze medal game. Australia currently sits in fourth place with a 1-3 record and a game left against Mexico (0-3). Mexico and Italy are playing each