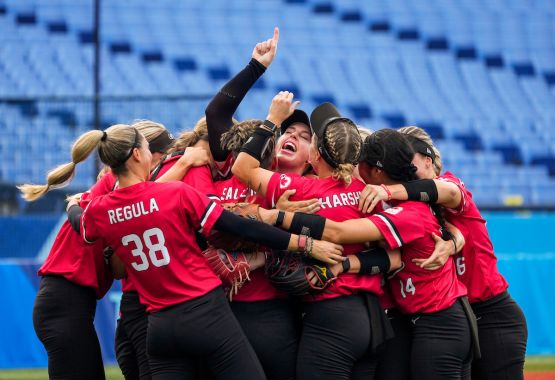 Ottawa, Ont. – Softball Canada is very pleased to announce a Women’s National Team Celebration Tour to celebrate the team’s historic Olympic Bronze medal win at the Tokyo 2020 Olympic Games. Celebration Tour stops include a series of games against. No. 10 Netherlands from June 16-18 in Ontario and against No. 11 Czech Republic from June 29 to July 1 in Saskatchewan.

Celebration Tour games in Ontario will include one game at Exhibition Park A1 in Guelph, Ont., one game at Durham Field in Oshawa, Ont. and a doubleheader at the Fairgrounds in Brampton, Ont.

Saskatchewan stops include a doubleheader at Spruce Haven Ball Park in Melfort, Sask., one game at Prime Ministers Park in Prince Albert, Sask. and a Canada Day doubleheader at Bob Van Impe Stadium in Saskatoon, Sask.

The Women’s National Team will also be competing at the Canada Cup International Fastpitch Championship from June 20-26 in Surrey, B.C. in between Celebration Tour stops.

Ticket information and streaming details for each individual location will be announced at a later date on the Women’s National Team Celebration Tour website.

Canada is currently ranked No. 3 in the WBSC Women’s Softball World Rankings and will compete in the World Games July 9-13 in Birmingham, Alabama, with a WBSC Americas Pan American Championship expected to take place in November.

A total of seven athletes from the Olympic roster have officially retired from the program, including three who have since taken coaching positions with the team – head coach Kaleigh Rafter (Guelph, Ont.), assistant coach Jenn Salling (Port Coquitlam, B.C.) and pool coach Joey Lye (Toronto, Ont.).

Softball Canada will hold open identification camps in Saskatoon, Surrey and Brampton over the next month followed by a final selection camp in Ontario ahead of the Celebration Tour games to select rosters for the Canada Cup and the World Games.