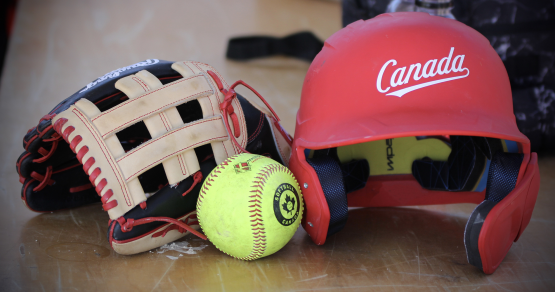 Ottawa, Ont. – Softball Canada is pleased to announce the coaching staff for the 2021-2022 cycle of the U18 Men’s National Team program. After three cycles as an assistant coach with the program, Mark Quinn (Mermaid, P.E.I) will take over the reigns as head coach and will be joined by assistant coaches Jean-Yves Doucet (St-Leonard-d’Aston, Que.), Kalen Kovitch (Prince Albert, Sask.) and Todd McCulloch (Moosomin, Sask.).

Mark Quinn (Mermaid, P.E.I) had a distinguished playing career at the club team level, competing in several Canadian Championships and he served as an assistant coach with the Junior Men’s National Team since 2015 before being named head coach last week. He helped Canada to a bronze medal finish at the 2016 World Cup in Midland, Michigan, followed by a fourth-place finish in 2018 in Prince Albert, Sask. and a seventh place showing in 2020 in Palmerston North, New Zealand. Quinn began his coaching career at the U13 level in New Zealand before moving back to P.E.I. in 2008, holding various coaching positions at the Men’s, U21 Men’s, U16 Girl’s, and Intermediate School levels. Quinn was the pitching coach for Team P.E.I. at the 2013 Canada Summer Games in Women’s Softball and Head Coach of P.E.I.’s Men’s Softball team at the 2017 Canada Summer Games. He is a Competition – Development Certified coach and a Master Coach Developer who was awarded a Coaching Association of Canada (CAC) Community NCCP Coach Developer award in 2018 and is currently a member of Softball Canada’s Coaching Committee.

Jean-Yves Doucet (St-Leonard-d’Aston, Que.) returns to the program after serving as a guest coach and scout with the team in 2014 and then as an assistant coach from 2015 to 2018, winning a bronze medal at the 2016 WBSC World Cup followed by a fourth-place finish at the event in 2018. He has international coaching experience in France, serving as an assistant coach of their U22 Junior Women’s National Team at the 2008 European Championship and as a consultant in 2002. Doucet has been instrumental in building the men’s fastpitch program in St-Leonard-d’Aston, QC and in the province of Quebec. He has been the Head Coach of the St-Leonard-d’Aston Express since 1993, and has represented Quebec as Head Coach of their men’s teams at 16 Canadian Championships (Gold in 2000, 2013 and 2016; bronze in 2006) and four Canada Summer Games (1989 – Silver; 1993, 2001 and 2017 - Bronze). He is also head coach of Team Quebec for the 2022 Canada Games.

Kalen Kovitch (Prince Albert, Sask.) joined the coaching staff in 2019, serving as an assistant coach with the U17 Men’s Team that won the gold medal at the 2019 WBSC Americas Pan American Championship in Guatemala and finished seventh at the 2020 U18 Men’s World Cup in New Zealand. He is still an active player at the local level in Saskatchewan and has competed in several Provincial and Canadian Championships. He began his coaching career at the minor level in Prince Albert from 2005 to 2013, leading his teams to a total of four Provincial Championship Gold medals. From there, he moved on to the U21 level where he served as an assistant coach for Team Saskatchewan at the 2013 U21 Men’s International Championship and Head Coach of the Saskatoon Jr. A Diamondbacks from 2014 to 2016. In 2017, Kovitch led Team Saskatchewan to the Silver medal in Men’s Softball at the Canada Summer Games.

Todd McCulloch (Moosomin, Sask.) also returns as an assistant coach after holding the position from 2015 to 2018. He has been a high-performance coach in Saskatchewan since 2003 with a focus on hitting and pitching and has worked with many individual players and teams to improve their skills with the use of video analysis. He has coached both men’s and women’s teams, including Team Saskatchewan at the 2007 and 2011 Western Canada Summer Games. McCulloch coached the University of Regina women’s softball team from 2009 to 2011, and has had success coaching various club teams since 2010, including a bronze medal at the 2010 U21 Women’s Canadian Championship and a pair of gold medals as an assistant coach at the provincial championships (U18 Men in 2013 and U21 Men in 2014). He was an assistant coach with the Grande Prairie Pirates team that finished fourth at the 2019 Men's Canadian Championship.

The anticipated schedule for the program is a WBSC Americas U17 Men’s Pan American Championship qualifier to be held in the Fall of 2021 followed by the WBSC U18 Men’s World Cup in 2022. Dates and locations for both events have not been determined.
Share: