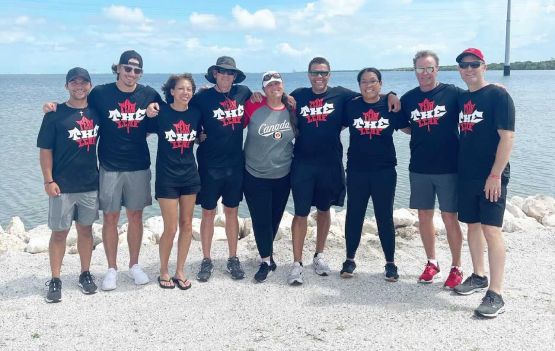 Ottawa, Ont. – With the Tokyo 2020 Olympic Games only a few weeks away, Softball Canada would like to acknowledge the tremendous work and accomplishments of our Women’s National Team Coaching Staff.

Softball Canada’s High-Performance Director and Women’s National Team head coach Mark Smith (Falmouth, NS) and manager / assistant Coach Melissa Basilio (Oshawa, Ont.) took over the program in 2009 – the year after Canada finished fourth at the Beijing Olympics in 2008 – and have done a phenomenal job creating a winning culture that has led to a number of impressive results. Over that 12-year period, the team competed in a total of five WBSC World Cups – winning three bronze medals and finishing fourth twice – as well as three Pan American Games, winning silver medals in 2011 and 2019 and the Gold medal in 2015, in addition to numerous podium results at WBSC Americas qualifiers, Canada Cups and USA Softball World/Intercontinental Cups.

“It has been very gratifying to observe the women’s program develop into a legitimate world-class program” stated Mark Smith. “Tokyo represents the culmination of many years of hard work and I am excited to watch our team compete.”

Smith is one of the most recognizable people in Canadian softball history. He was inducted to the Softball Canada Hall of Fame in the Athlete category after a stellar playing career that included 28 years with the Men’s National Team, as a player and then coach, and was also inducted as a member of the 1983 Pan American Games and 1992 WBSC World Championship teams. He represented Canada in a total of eight Pan American Games as an athlete and coach winning three gold medals as a player and three as a coach with two silver medal finishes. He was a member of the 1992 Canadian Men’s National Team that won gold at the WBSC Men’s World Cup. As a head coach, he led the men’s team to two WBSC World Cup podium finishes. Since taking over the women’s program, he’s added five World Cup appearances and three Pan American Games podium finishes.

Basilio played NCAA softball at the University of Delaware before taking a coaching position at Winthrop University from 2005 to 2010. She was added to the Canadian Junior Women’s National Team coaching staff in 2007 and served as head coach of the team at the 2013 and 2015 WBSC World Cups. She has been an assistant coach with the Women’s National Team since 2009, helping to lead the team at five World Cups, three Pan American Games and multiple annual and qualifying tournaments.

Jones joined the coaching staff ahead of the 2019 Pan American Games. He has a wealth of playing experience with the Canadian Men’s National Team program and won gold at the 1995 and 1999 Pan American Games and added a silver medal at the 2004 WBSC World Cup. Since retiring from his playing career, he has coached at the minor girls’ level and is the head coach of Team Ontario for the Niagara 2022 Canada Summer Games.

Alameda was added to the staff in 2020 and just led her Florida State Seminoles to the Women’s College World Series championship series in 2021. She took on the head coach position at Florida State in 2009 after five years as head coach at UNLV and has led the Seminoles to four Women’s College World Series, including a national title in 2018. She has previous Olympic coaching experience serving as an assistant coach with the Canadian National Team for the Beijing 2008 cycle.

In addition to the on-field coaching staff, Softball Canada is also very appreciative of the extraordinary work of its support staff that has been added for the current Olympic cycle.

Scott Willgress (Halifax, N.S.) has been the team’s strength and conditioning coach since 2017 and his individualized training programs have successfully led our athletes to attain their peak physical condition to compete on the field.

Josh Crouse (Antigonish, N.S.) started working with the program as an assistant strength coach in 2019. Josh supports Scott Willgress in overseeing the strength and conditioning program and has travelled with the team during the summer of 2021.

Natalie Ghobrial (Toronto, Ont.) has served as the team’s full-time athletic therapist since 2018 after working with the team on several occasions prior to that. She has done an excellent job treating our athletes and ensuring they fully recover to compete at their full potential.

Carolyn Taylor (Winnipeg, Man.) took over performance analyst duties in 2019, and her excellent video work and research has provided our Women’s National Team coaching staff and athletes valuable information that help them reach their individual and team performance goals.

Wade Gilbert (Fresno, Calif.) is an internationally renowned coaching consultant and sport scientist who has worked with our Women’s National Team as its mental performance coach for a number of years. He has had a tremendous impact in helping our athletes from a sport psychology perspective helping them perform at their best.

Angela Dufour (Halifax, N.S.) has been working with our athletes as team performance dietician for the last few years, providing valuable information and nutrition programs to help them understand the nutrients they need consume to compete at an optimal level.

As our team puts their final preparations together for the biggest event of their lives in Tokyo, Softball Canada recognizes and truly appreciates all of the time the coaching and support staff have put into building a team that has everything it needs to compete for a gold medal.