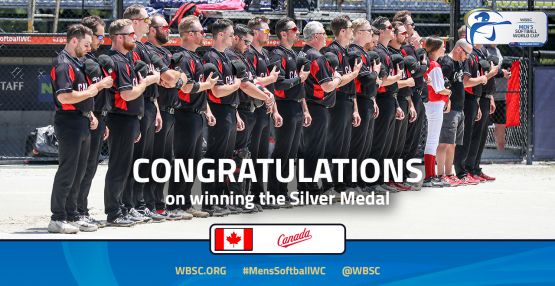 Auckland, New Zealand – The Canadian Men’s National Team won the silver medal at the 2022 WBSC Men’s Softball World Cup after a 5-2 loss to Australia. The Aussies scored two runs in the top of the first inning and held Canada scoreless until the fifth on their way to earning the world title.

Australia struck first in the top of the first inning, with their leadoff batter starting the game with a double off the center field wall. After another double put runners on second and third, Marshall Kronk hit a sacrifice fly to the left field corner that was caught in foul territory allowing one run to score, and the second run scored on an errant throw to the plate. The Australians added another run to their lead in the top of the third when the leadoff batter reached on a bunt single and moved up to second on a bad throw to first, to third on a wild pitch and crossed the plate on a single by Callum Beashel.

Meanwhile, Canada wasn’t able to get much going offensively against Aussie pitcher Jack Besgrove until the third. Ryan Boland (St. John’s, N.L.) led off with a single followed by another single by Colin Walsh (Petty Harbour, N.L.) to put runners on the corners with no outs. However, the next two batters struck out followed by a line out to Besgrove as Canada was unable to get on the board.

Team Canada was able to get their first run in the bottom of the fifth, with Ty Sebastian (Brussels, Ont.) laying down a bunt that was thrown over the first baseman, allowing him to advance to second. Boland followed with a single to right to score Sebastian and get Canada into the game with a 3-1 score. However, an inning-ending double play put Canada back on defence and the Aussies responded immediately, with Nick Shailes leading off with a homerun later followed by a run-scoring single by James Todhunter to give Australia a 5-1 lead.

As they did earlier in the week, Canada proved they would fight back by scoring a run in the bottom of the seventh when Ryan Boland drew a two-out walk and courtesy runner Jason Hill (St. John’s, N.L.) scored from first on a double to the left field corner by Walsh, but it was too little and too late as the next batter grounded out to end the game.

Sean Cleary (Harbour Main, N.L.) took the loss in the pitcher’s circle, allowing three runs (one earned) on five hits and he struck out five batters in four innings and one third. Justin Schofield (Grand Pre, N.S.) allowed two runs (one earned) on three hits and struck out two in two and two third innings. Walsh led Canada at the plate with a double and a single with Ryan Boland hitting two singles for Canada’s only four hits.

Earlier in the day, the United States defeated Argentina 2-0 to earn the bronze medal.