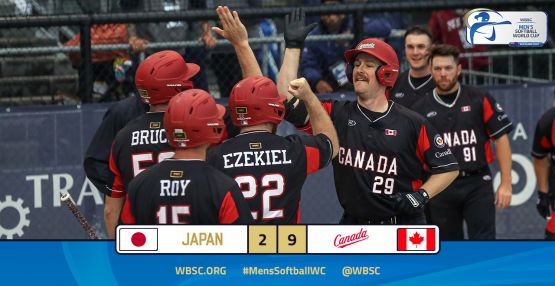 Auckland, New Zealand – The Canadian Men’s National Softball Team capped off its preliminary round schedule with a 9-2 win in five innings over Japan to secure top spot in Pool B at the 2022 WBSC World Cup on Wednesday. Canada’s offence hit three homeruns and took advantage of three Japanese errors to come away with the run rule win.

Canada opened the scoring in the bottom of the first inning, as Shane Boland (St. John’s, N.L.) led off by lacing a single into left, moving up to second on a walk and coming around to score on a fielder’s choice by the third baseman who didn’t step on the bag behind him at third and threw the ball into right field trying for the force play at second. Japan got a leadoff double to start the second but Justin Schofield (Grand Pre, N.S.) struck out the next two batters and induced a fly out to center to leave the runner stranded.

In the bottom of the third, Mathieu Roy (St-Gervais, Que.) worked his second walk of the game followed by a solid single to center by Bradley Ezekiel (Harbour Main, N.L.) before Derek Mayson (North Vancouver, B.C.) kept his hot streak going with a three-run homerun to center. Quinten Bruce (Grand Valley, Ont.) and Bryan Abrey (Richmond, B.C.) followed up with singles with Ty Sebastian (Brussels, Ont.) hitting a three-run blast of his own to center to give Canada a commanding 7-0 lead.

Canada finished a perfect 5-0 in the preliminary round and will carry a 2-0 record into the Super Round with their wins over Australia (1-1) and Venezuela (0-2). Canada will play the three top teams from Pool A in the Super Round – the United States (1-1) at 1:30pm NZDT on Thursday (7:30pm EST Wednesday), Argentina (2-0) at 4:30pm NZDT on Friday (10:30pm EST on Thursday) and Cuba (0-2) at 1:30pm NZDT on Saturday (7:30pm EST on Friday). Streaming is available at gametime.sport, with live scoring available on the World Cup website.