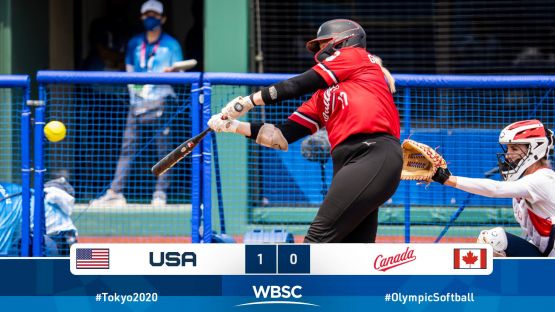 Fukushima, Japan – The Canadian Olympic Softball Team and the United States played an excellent ball game to start the second day of competition at the Tokyo 2020 Olympic Games, with the Americans coming out on top with a narrow 1-0 win. The Canadian bats were not able to get much going against Monica Abbott for most of the game, but they did have a great opportunity to score in the sixth that did not materialize.

Fresh off her dominant performance over four innings against Mexico on Wednesday, Sara Groenewegen (Surrey, B.C.) got the ball again in the pitcher’s circle for Canada. The United States were able to load the bases in the first and get runners to second and third in the second, but Groenewegen was able to escape both innings unscathed with key strikeouts to keep the game scoreless.

Jenna Caira (Toronto, Ont.) came out in relief of Groenewegen to start the third and retired the Americans in order in the third and fourth innings but ran into trouble in the top of the fifth. Haylie McCleney reached on an infield single, was sacrificed to second and scored on a single to right by Amanda Chidester as the United States took the 1-0 lead.

Meanwhile, Abbott held Canada to only one baserunner – a two-out walk by Erika Polidori (Brantford, Ont.) in the second – through the first five innings before Canada made a late push in the bottom of the sixth. Jen Gilbert (Saskatoon, Sask.) worked the count to draw a leadoff walk and Joey Lye (Toronto, Ont.) pinch ran for her at first. Groenewegen reentered the game as a pinch hitter and drilled a line drive into the right-center field gap but Lye was thrown out at the plate after a perfect relay from the American defense. Groenewegen ended up on third after the play, but a fly out to left was not deep enough to score the runner from third, and after an intentional walk, the next batter struck out to leave two runners in scoring position. Abbott retired all three Canadian batters in the seventh to secure the complete game win.

Groenewegen allowed three hits and issued a walk while striking out four batters over the first two innings. Caira took the narrow loss, allowing one run on three hits with two strikeouts in two innings and two thirds of relief. Lauren Regula (Trail, B.C.) made her first appearance of the tournament and struck out one batter in an inning and a third, while Danielle Lawrie (Langley, B.C.) allowed a hit and struck out one in the seventh. Groenewegen’s double was Canada’s lone hit, with Larissa Franklin (Maple Ridge, B.C.), Polidori and Gilbert each drawing a walk.

The loss dropped Canada’s record to 1-1 while the United States improved to 2-0. Following their game, Japan got by Mexico 3-2 in eight innings to improve to 2-0, while the Mexicans dropped to 0-2. Australia (0-1) will take on Italy (0-1) at 3:00pm JST. All six teams will travel back to Tokyo before continuing the tournament at Yokohama Stadium on Saturday. Team Canada will open the day against Australia at 10:00am JST on Saturday, July 24 (9:00pm EDT July 23) on TSN2.

Television Coverage / Streaming
CBC is the official broadcaster of the Olympic Games in Canada and will be streaming all games on CBC.ca and on the CBC Gem and CBC Olympics apps. Please check your local listings at https://www.cbc.ca/sports/broadcast. Television coverage for the game against Australia will be live on TSN2, while the games against Japan and Italy will air live on TSN.

RDS.ca is broadcasting the games in French.

Interaction
Softball Canada has created a Discord channel where fans can go chat while watching the games and has also launched its “CHEER ON” campaign allowing fans to submit messages of support to their favourite players! Post a video cheer on social media using #CheerOnSC and tagging Softball Canada we will share it with our followers!