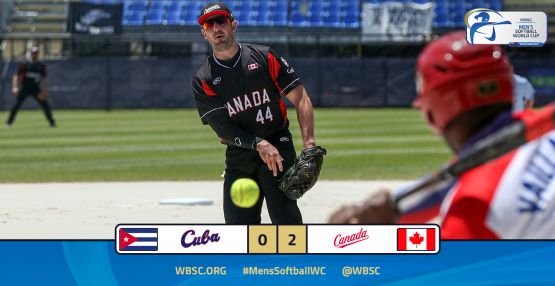 Auckland, New Zealand – The Canadian Men’s National Softball Team blanked Cuba 2-0 in a low-scoring game to earn a berth in Sunday’s gold medal game at the 2022 WBSC Men’s Softball World Cup. Sean Cleary (Harbour Main, N.L.) took a perfect game all the way to the final batter before it was broken up, while Canada’s offence took advantage of an error, some walks, and wild pitches to score two runs on only one hit.

Cleary struck out the side in the first before Canada got on the board in the bottom of the inning. Shane Boland (St. John’s, N.L.) led off with a hard ground ball that was booted into center field by the second baseman, allowing him to move up to second. A hit by pitch and a walk loaded the bases before Cory Jones (Leduc, Alta.) drew another walk to bring Boland in to score.

Team Canada added it’s second run in the bottom of the fourth, with pinch-hitter Jason Hill (St. John’s, N.L.) working a leadoff walk, advancing to second on a ground out to second and to third on a wild pitch before scoring on a sacrifice fly to center by Boland to make the score 2-0. Meanwhile, Cleary kept making quick work of Cuba, striking out the side in the second and fifth innings.

In the top of the seventh, Cleary got a strikeout and a fly out to start the innings, but walked the next batter on a full count, followed by line drive off him for Cuba’s only hit of the game. He struck out the following hitter to preserve the shutout and send Canada to the gold medal game.

Cleary struck out allowed only one hit and one walk and struck out 15 batters in the seven-inning win. Canada’s only hit was a single by Bryan Abrey (Richmond, B.C.) in the top of the third, but the team was patient at the plate and drew seven walks.

The win improved Canada’s Super Round record to 4-1 and they will now face Australia (4-1) in the Gold medal game at 4:00pm NZDT on Sunday (10:00pm EST Saturday). Australia earned their spot by defeating Argentina (4-1) 2-0 on Saturday night, with the three-way tie being broken by the least amount of runs against between the three teams. Canada had the least amount of runs with five, and Australia held the tiebreaker over Argentina with their head-to-head win.

Earlier in the day, the United States (2-3) defeated Venezuela (0-5) to earn a spot in the bronze medal game and will face Argentina at 1:00pm NZDT.

Streaming is available at gametime.sport, with live scoring available on the World Cup website.