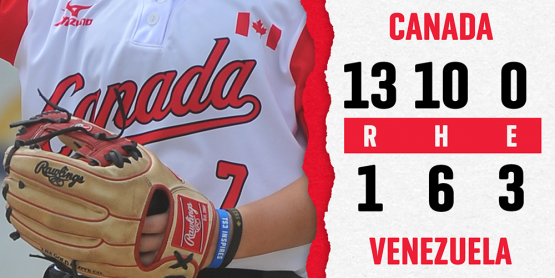 Barranquilla, Colombia – The Canadian U17 Junior Women’s National Team opened the Pan American Championship with a 13-1 win in four innings over Venezuela on Friday. Canada scored five runs in the second inning and exploded for eight more in the third on route to the run rule victory.

Venezuela started the game strong by loading the bases with three singles in the top of the first, but Canadian starting pitcher Katie Korstrom (Abbotsford, B.C) worked herself out of the inning with a key strikeout and a ground out to keep Venezuela from scoring. In the bottom half of the second, Team Canada got on the scoreboard by pushing five runs in to score all with two outs. Deanna Grahek (Georgetown, Ont.) reached on an error to get things started and immediately scored on a double by Ella Herrewig (Surrey, B.C.). Kaitlyn Achtermeier (Newmarket, Ont.) singled to score Herrewig and after an error and a single by Erin Murphy (Surrey, B.C.) loaded the bases, a passed ball scored a run and an error by the first baseman allowed two more runs to score as Canada built a 5-0 lead.

In the bottom of the third, Abbey Tolmie (Clarkston, Mich.) led off with a single followed by a walk by Annabelle Guay (Terrebonne, Que.) with Grahek keeping it going with a run-scoring single. Back-to-back hit by pitches loaded the bases and forced a run home before Emma Dorval (Surrey, B.C.) smashed a two-run double. Shelby Miller (Georgetown, Ont.) followed with a run-scoring single, with Olivia Goderis (Swan Lake, Man.) and Grahek each hitting RBI singles later in the inning to give Canada a commanding 13-0 lead. Venezuela broke the shutout by getting a runner on base with a two-out walk, and that runner went on to score after a pair of passed balls and a single. Rawnie Weststrate (North Delta, B.C.) struck out the next batter to end the game on the run-ahead rule.

Kortstrom picked up the win for Canada in the pitcher’s circle with three scoreless innings, scattering five hits and striking out one batter. Weststrate pitched one inning of relief, allowing a run on a hit and a walk with one strikeout. At the plate, Grahek drove in two runs with a pair of singles, Dorval doubled in two runs and Achtermeier picked up two singles and drove in two. Herrewig hit a double and produced a run, with Murphy hitting two singles and driving in one while Miller and Goderis each had RBI singles.

Canada (1-0) will take on Puerto Rico at 11:30am local time (12:30pm EDT) on Saturday. Live streaming is available on the Game Time streaming platform and the WBSC YouTube page.
Share: