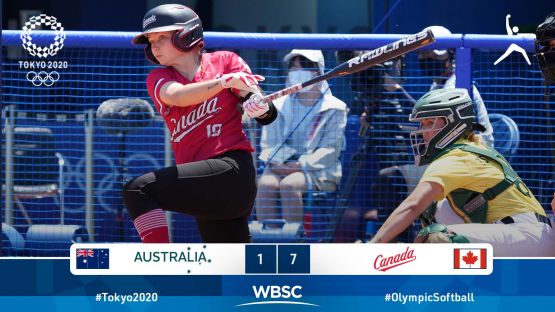 Yokohama, Japan – The Canadian Olympic Softball Team improved their record to 2-1 with a convincing 7-1 win over Australia on Saturday at the Tokyo 2020 Olympic Summer Games. Australia came out strong in the first two innings, but Canada responded in a huge way with three runs in each of the first two innings to put the game out of reach.

Australia’s bats went to work early, with Leigh Godfrey hitting a leadoff single followed by a ground rule double Stacey Porter to put runners on second and third. A hit by pitch loaded the bases and after a fielder’s choice retired Godfrey at home, Australia opened the scoring with a bases loaded walk. Canadian starting pitcher Sara Groenewegen (Surrey, B.C.) settled in from there, and got a pair of big strikeouts to keep the score at 1-0. The Canadian offence responded immediately. Leadoff hitter Victoria Hayward (Toronto, Ont.) earned a walk, stole second and scored on a throwing error on a ground ball to third. A walk put runner on first and second and the runners moved up on a sacrifice bunt by Kaleigh Rafter (Guelph, Ont.) before Jenn Salling (Port Coquitlam, B.C.) delivered a two-run ground rule double over the centerfielder.

In the top of the second, Australia got back-to-back singles and the runners were sacrificed followed by an intentional walk to Porter. Jenna Caira (Toronto, Ont.) came on in relief of Groenewegen, and notched an important strikeout followed by a lineout to first to get Canada out of the inning and leaving three runners stranded on base. In the bottom of the frame, Canada got a pair of singles by Janet Leung (Mississauga, Ont.) and Hayward and took advantage of a costly mistake on a ground ball to first that was thrown away at second base, allowing Leung to score and putting runners on second and third. Salling was intentionally walked to load the bases before Erika Polidori (Brantford, Ont.) drove a two-run ground rule double to center to give Canada a commanding 6-1 lead.

After a quick third inning with both teams going down in order, Canada loaded the bases in the bottom of the fourth with a single by Kelsey Harshman (Delta, B.C.) and walks to Salling and Polidori before Emma Entzminger (Victoria, B.C.) singled to left to score Harshman, but Salling was thrown out at the plate. In the fifth, Australia picked up a pair of singles, but an inning-ending double play put an end to the threat. The Aussies couldn’t get anything going in the sixth or seventh innings and Canada took the 7-1 win.

Groenewegen started the third consecutive game for Canada and allowed one run on four hits and two walks while striking out two in an inning and a third. Caira was fantastic to earn the win, limiting Australia to only two hits and striking out three over four innings and two third. Lauren Regula (Trail, B.C.) retired all three batters she faced in the seventh, striking out one batter. At the plate, Polidori went 2-for-3 with a double and two runs batted in, while Salling had a two-run double and walked three times. Harshman singled twice and scored three times, with Hayward, Entzminger and Leung each adding a single.

Television Coverage / Streaming
CBC is the official broadcaster of the Olympic Games in Canada and will be streaming all games on CBC.ca and on the CBC Gem and CBC Olympics apps. Please check your local listings at https://www.cbc.ca/sports/broadcast. Television coverage for the game against Australia will be live on TSN2, while the games against Japan and Italy will air live on TSN.

RDS.ca is broadcasting the games in French.

Interaction
Softball Canada has created a Discord channel where fans can go chat while watching the games and has also launched its “CHEER ON” campaign allowing fans to submit messages of support to their favourite players! Post a video cheer on social media using #CheerOnSC and tagging Softball Canada we will share it with our followers!