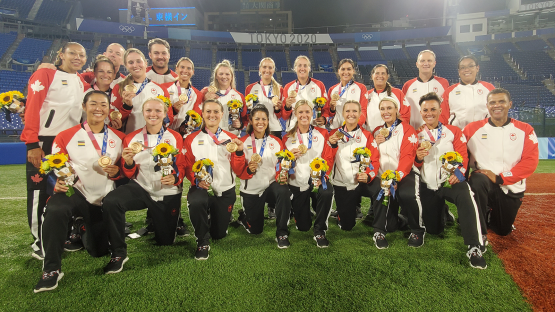 Yokohama, Japan – The Canadian Olympic Softball Team made history on Tuesday, defeating Mexico 3-2 to earn its first-ever Olympic medal with a bronze at the Tokyo 2020 Olympic Games. Canada has participated in all five Olympic softball competitions dating back to 1996 and its previous best finish was fourth in 2008.

Mexico put the pressure on Canada early in the top of the first, getting back-to-back one-out singles by Nicole Mendez and Anissa Urtez but Canadian pitcher Sara Groenewegen (Surrey B.C.) struck out the next batter and got the following hitter to fly out to right to leave the runners stranded. Canada opened the scoring with two runs in the bottom of the second. Jenn Salling (Port Coquitlam, B.C.) dropped a bunt single and moved up to second on a fielder’s choice to third that the second base player dropped on the throw. A ground out moved the runners up to second and third before Emma Entzminger (Victoria, BC.) dropped a fly ball into shallow left field to plate two runs.

In the top of the third, Brittany Cervantes hit a run-scoring single to cut the lead in half at 2-1, and Mexico came back to tie the game with an RBI single by Suzannah Gonzalez in the top of the fifth. However, Canada regained the lead in the bottom of the frame when Janet Leung (Mississauga, Ont.) and Victoria Hayward (Toronto, Ont.) started the inning with singles, were sacrificed ahead by Larissa Franklin (Maple Ridge, B.C.) and Leung crossed the plate on a sacrifice fly to left by Kelsey Harshman (Delta, B.C.).

Danielle Lawrie (Langley, B.C.) pitched the final two and a third innings for Canada, allowing one hit and striking four batters including the last batter in the top of the seventh too lock down the bronze medal win.

Groenewegen pitched the first three innings for Canada and allowed one run on three hits and three strikeouts, while Jenna Caira (Toronto, Ont.) gave up one run on three hits in an inning and two thirds before Lawrie closed out the game. Hayward doubled and singled for Canada, with Entzminger’s two-run single and Harshman’s sacrifice fly being all the scoring Canada needed. Salling, Leung and Groenewegen each had a single.

It was a historic bronze medal win for Canada at the Olympic Games, while Mexico was impressive in their first Olympic appearance. In the gold medal game, Japan shut out the United States 2-0 to claim its second Olympic gold medal.