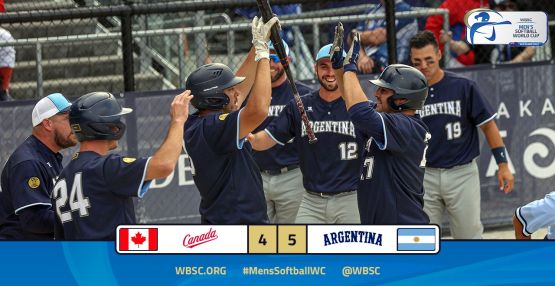 Auckland, New Zealand – The Canadian Men’s National Softball Team fought back from a 4-0 deficit but dropped a 5-4 decision to Argentina in the Super Round of the WBSC World Cup on Friday. Canada battled back to tie the game with a pair of homeruns in the fourth and a two-run single in the fifth but a sacrifice fly by Argentina in the bottom of the fifth proved to be the winning run.

After a scoreless first inning, Bryan Abrey (Richmond, B.C.) robbed a homerun at the right field fence to end the second to keep Argentina off the board. However, Argentina was able to push four runs across in the bottom of the third highlighted by a run-scoring double by Alan Peker and a two-run homerun by Manuel Godoy. Canada’s resilient bats fought back in the top of the fourth when Bradley Ezekiel (Harbour Main, N.L.) and Abrey each hit solo homeruns to cut the lead to 4-2.

In the bottom of the fourth, Argentina loaded the bases with no outs on two walks and an infield single, but Canada got out of the inning wit no further damage after turning a third to home to first double play and getting a key strikeout by Justin Schofield (Grand Pre, N.S.) to stay within two. In the top of the fifth, Shane Boland (St. John’s, N.L.) drew a leadoff walk and moved up to third on a double by Mathieu Roy (St-Gervais, Que.) before Abrey delivered a two-run single up the middle to tie the game.

Argentina regained the lead in the bottom of the inning, getting a one-out triple by Teo Migliavacca who came in to score on a sacrifice fly. Pinch hitter Cory Jones (Leduc, Alta.) hit a one-out single, but was thrown out at home on the next play when Quinten Bruce (Grand Valley, Ont.) hit an infield single to the second baseman who overthrew first base, with a close play at the plate to retire Jones trying to take advantage of a throw back to first. Argentina retired Canada in order in the top of the seventh to end the game.

Ty Sebastian (Brussels, Ont.) started the game in the circle for Canada and allowed three runs on three hits with two strikeouts in two innings and a third. Zach Pierce (Saskatoon, Sask.) gave up the homerun to Godoy in two thirds of an inning of relief, while Schofield settled for the loss allowing one run on three hits and striking out four over three innings. Abrey hit a homerun, a single and drove in three runs for Canada, with Ezekiel adding a solo homerun and Roy contributing a double. Jones, Bruce and Colin Walsh (Petty Harbour, N.L.) each registered singles.

The loss dropped Canada’s Super Round record to 3-1, while Argentina improved to 4-0. Earlier in the day, Australia (3-1) defeated the United States (1-3) by a score of 12-9 to stay in the hunt for a spot in the gold medal game. Canada will conclude its Super Round schedule against Cuba (1-3) at 1:30pm NZDT on Saturday (7:30pm EST on Friday). Argentina and Australia will face each other at 7:30pm NZDT.

Streaming is available at gametime.sport, with live scoring available on the World Cup website.