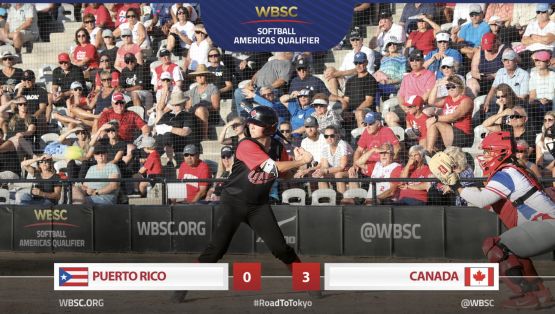 It was a tense game, with both teams putting runners on base in the early innings, but unable to cash them in.

In the bottom of the third, Canada took advantage of their opportunities to score all the runs they would need in the contest. Janet Leung (Mississauga, Ont.) was awarded first base on a hit by pitch to lead off the inning and was moved over to third on a bunt single to a vacated spot at second base by Victoria Hayward (Toronto, Ont.). Jennifer Gilbert (Saskatoon, Sask.) reached on a fielder’s choice with Puerto Rico retiring Leung at home, and another fielder’s choice by Holly Speers (Surrey, C.-B.) scored Hayward from third to make it 1-0. The next two runs of the contest for Canada came off the bat of the next batter Jennifer Salling (Port Coquitlam, B.C.), who doubled home Gilbert and Speers to make the score 3-0.

Puerto Rico’s best chance to break the shutout came in the top of the fourth with back-to-back singles to lead off the inning, but a ground out by Aleshia Ocasio and a pair of strikeouts by Sara Groenewegen (Surrey, B.C.) ended the threat.

It was another combined pitching effort for Canada, with Groenewegen, Jenna Caira (Toronto, Ont.) and Danielle Lawrie (Langley, B.C.) all seeing action in the game. Groenewegen made the start and went four innings, giving up no runs on four hits while striking out four. Caira came in to start the fifth and pitched two perfect innings, including snagging a line drive off the bat of Ocasio to end the sixth. Lawrie closed out the game with an inning of work in which she didn’t allow a hit and struck out one.

It was a key win for Canada as the top three teams from each pool will carry their records against the teams they have already played into the Super Round. Three key games will be played on Thursday, with Cuba (3-1) taking on Puerto Rico (3-1) at 3:30pm PDT which will determine second and third place in Group A, while Group B will see Peru (2-2) face Venezuela (2-2) at 7:30pm PDT with a spot in the Super Round on the line and a matchup between Mexico (4-0) and Brazil (4-0) at 8:30pm PDT will determine first and second place.