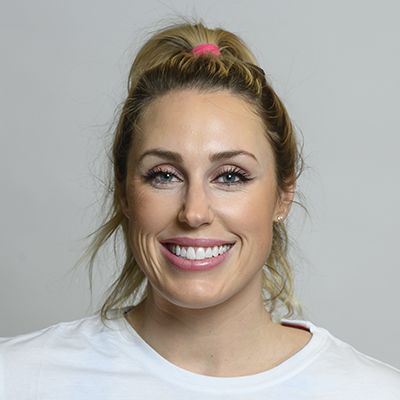 A native of Langley, British Columbia, Danielle Lawrie has made numerous appearances for Team Canada since debuting with the National Team in 2005. That year, she burst onto the international scene when she beat the United States at the World Cup of Softball, tossing a complete game and striking out seven batters. That win by Lawrie broke a three-year win streak by Team USA in international Competition. She was on the last Canadian Olympic team at the Beijing 2008 Olympic Games where Canada finished fourth. At the WBSC Women’s Softball World Championships, she was part of the Team Canada squads in 2006, 2010, 2012 and 2018 with Canada taking home bronze in 2010 and 2018. She competed in two Pan American Games 12 years apart, winning Silver in both 2007 and 2019. Lawrie was a dominant in the pitcher's circle for Canada at the 2019 WBSC Americas Qualifier, starting three games and earning a 2-0 record with a 0.00 ERA, allowing only two hits and striking out 23 batters in 14.1 innings pitched to help lead Canada to a berth at the Tokyo 2020 Olympic Games.

While studying Sociology at the University of Washington, she had a dominant playing career in four seasons with the Huskies, and is arguably one of the best softball players to ever play in the NCAA. In 2009, she earned her first of back-to-back USA Softball Player of the Year awards going 42-8 with 521 strikeouts and just 76 walks in 350.2 innings and helped lead the Huskies to a championship title at the Women’s College World Series. She finished her collegiate career at UW sitting atop most pitching categories including appearances (199), games started (194), wins (136), complete games (149), shutouts (65), strikeouts (1,860), and innings pitched (1,190.2). She also pitched six no-hitters during her years as a Husky.

After completing her collegiate career, Lawrie moved on to professional softball as part of the NPF’s USSSA Pride from 2010-2014, was named an All-Star for the Pride in 2011 and was a Cowles Cup champion in 2013 and 2014. She also played two seasons in the Japanese Professional Softball League in 2013 and 2014. She returned to the NPF as a member of the Canadian Wild of Southern Illinois in 2019, going 2-2 with 2 saves and a 2.12 ERA with 29 strikeouts in 39.2 innings pitched.

Lawrie had the opportunity to rewrite the final chapter of her playing career and accomplished just that by winning the bronze medal at the Tokyo 2020 Olympic Games. She pitched 11.1 innings allowing only one earned run and striking out 10 batters, none better than the final batter in the bronze medal game against Mexico.

What Minor Softball Association did you grow up playing in? Langley Rebels, White Rock Renegades
What’s your favourite food? Sometimes nothing beats a Pad Thai with no bean sprouts and extra spicy!!
What’s your favourite book? I just finished When Nobody Was Watching by Carli Lloyd and it's now my favourite book I’ve read to date.
What’s the best movie you’ve ever watched? It’s a tie between The Sandlot & A Christmas Story. Both take me back to my childhood of me and my brother hanging out and living our best life.
What’s your pre-game ritual? It’s all about getting into the zone, I don’t do anything crazy... I think when there is more on the line in more intense games, for instance at 2018 Worlds, I’m big in getting in a good headspace visualization wise: I see my pitches break, I see the movement and I see me dominating.
What’s your favourite place that softball has taken you, and why? 2008 Olympics in Beijing. As hard as that experience was, I’m not the same person today If I don’t go through that grind. It was incredible representing my country on the highest stage/level, I only wish I had the mindset I do now back when I was 21 years old!
What are your future aspirations? Continue my broadcasting career, I love being able to be a part of this game on that side of things. I also hope to add another beautiful baby to our tribe if it’s meant to be.
If you could spend an hour with anyone in the world, living or dead, who would it be? My sister Nicole. She passed away when I was a little over 4 years old. I would do anything to get an opportunity to sit and talk with her about my life, my girls, my family, my brother, and my mom and dad.