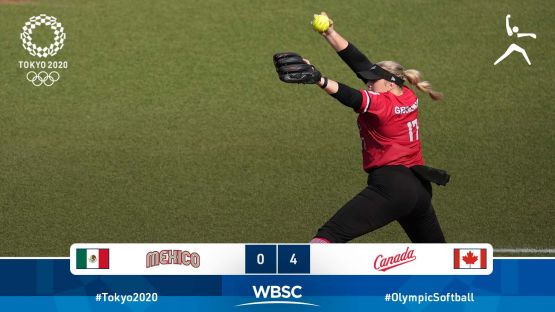 Making her first Olympic start, Groenewegen was great right out the gate retiring Mexico in order in the first before Canada jumped out to an early lead by scoring twice in the bottom of the inning. Victoria Hayward (Toronto, Ont.) beat out an infield single on a well-placed ball to second and Larissa Franklin (Maple Ridge, B.C.) executed a perfect bunt single to set the stage for back-to-back run-scoring singles by Rafter and Salling.

In the third, Groenewegen issued a one-out walk but the runner was later thrown out trying to steal second to end the inning. Canada added to its lead in the bottom of the frame when Salling lined a homerun over the right field fence to make it 3-0. The following inning, Hayward led off with a single, moved up to second on a wild pitch and to third on a ground out before scoring on a single to right by Kelsey Harshman (Delta, B.C.). The Canadians were able to load the bases after a pair of walks but was not able to break the game open as the next batter flew out to right.

Looking to get back into the game, Mexico put a pair of runners on base in the top of the fifth inning with their first hit of a game – a single Suzannah Gonzales – and a hit by pitch, but Jenna Caira (Toronto, Ont.) notched an important strikeout to end the frame. The following inning, Mexico got a leadoff single on a slap towards second from Tatyana Forbes but was unable to advance her any further. Franklin led off the bottom of the sixth with a single but was doubled off at first after a great catch in right field that hung up just long enough to be caught. Rafter followed that play with a single of her own, but a fly out ended the inning. Danielle Lawrie (Langley, B.C.) retired the side in order in the top of the seventh to end the game.

Groenewegen picked up the win in her first Olympic start, issuing only one walk and striking out three batters while facing the minimum over four innings of work. Caira allowed a hit and struck out one in one inning of relief, with Lawrie earning the two-inning save with one hit and two strikeouts as the Canadian pitching trio limited Mexico to only two hits. The top half of the lineup provided all the offence Canada needed, with Hayward, Franklin, Rafter and Salling all producing two hits – including Salling’s homerun – and Harshman adding an RBI single. Canada scored four runs on a total of nine hits.

Team Canada will have a short turnaround and will face the United States at 9:00am JST on Thursday (8:00pm EDT Wednesday) at Fukushima Azuma Stadium. Japan will square off with Mexico at noon, followed by Australia against Italy at 3:00pm before all teams return to Tokyo to continue the tournament at Yokohama Stadium.