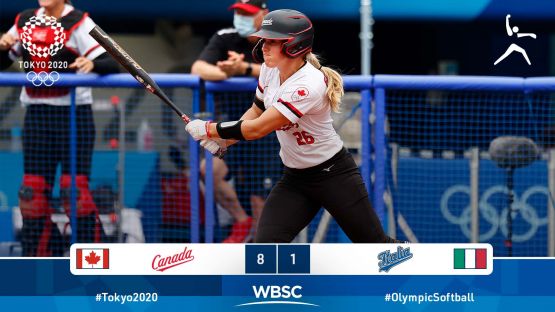 Yokohama, Japan – The Canadian Olympic Softball Team regrouped from their heartbreaking loss on Sunday to bounce Italy 8-1 in six innings at Yokohama Stadium on Monday. The game had no impact on the standings, as Canada had already secured a spot in Tuesday’s bronze medal game after Italy lost to Mexico on Sunday night.

Italy got back-to-back two-out singles in the bottom half of the first, but Canada’s starting pitcher Danielle Lawrie (Langley, B.C.) struck out the next batter before Canada opened the scoring on a solo homerun by Jen Gilbert (Saskatoon, Sask.) in the top of the second. In the bottom of the frame, Italy got a runner on base with a hit by pitch and Canada followed with a great double play on a ground ball to short to end the inning.

Making her first start of the tournament, Joey Lye (Toronto, Ont.) tripled to right field with one out in the third but was retired at home on a ground ball to third by Victoria Hayward (Toronto, Ont.). Larissa Franklin (Maple Ridge, B.C.) followed with a double to center to score Hayward to give Canada a 2-0 lead. Italy cut that lead in half in the bottom of the third, getting a double by Laura Vigna who later scored on a single by Erika Piancastelli.

Team Canada added three runs to its lead in the fifth. Lye got things started with a single to left, and advanced to third after Hayward reached on an error and moved up to second on the play. Franklin scored Lye with a sacrifice fly to left, while Hayward crossed the plate on a single by Jenn Salling (Port Coquitlam, B.C.) who later scored on an error to push the score to 5-1. The red and white then poured on with three more runs in the top half of the sixth to put the run rule into effect. Emma Entzminger (Victoria, B.C.) was hit by a pitch and stole second, with Lye drawing a walk with Entzminger advancing to third on a wild pitch. After Lye stole second, Hayward drove a two-run double to center and advanced to third on an error before scoring on another sacrifice fly by Franklin to make it 8-1. Lauren Regula (Trail, B.C.) struck out two batters and induced a ground out to third to end the game on the run rule.

Lawrie allowed one run on four hits and three strikeouts over three innings for Canada, while Regula pitched three innings of relief allowing two walk and striking out five. Franklin doubled and drove in three runs for Canada and Hayward added a two-run double and scored three times. Lye tripled, singled, stole a base and scored twice, while Salling had two singles and an RBI. Gilbert put Canada on the board with a solo homerun.

The win pushed Canada’s record to 3-2, while Italy finished at 0-5. Earlier in the day, the United States (5-0) defeated Japan (4-1) by a 2-1 score in their final preliminary round game, and the two teams will meet once again in Tuesday’s gold medal game at 8:00pm JST (7:00am EDT). Canada will face Mexico (2-3) in the bronze medal game that is scheduled for 1:00pm JST on Tuesday (midnight EDT) on CBC. Mexico advanced to the bronze medal game by defeating Australia 4-1 in the late game on Monday night.