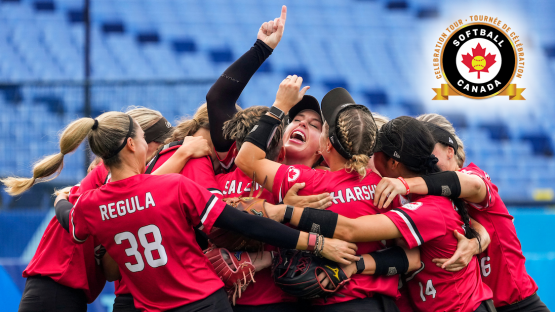 Saskatoon, Sask. – The Canadian Women’s National Softball Team took both ends of a doubleheader 1-0 and 8-1 against the Czech Republic on the final stop of their Celebration Tour at Bob Van Impe Stadium. Erika Polidori (Brantford, Ont.) hit a solo homerun for the only run in the first game, and the red and white scored four runs in each of the second and fourth innings in the second game.

The opening game was a low-scoring affair, as the Czech Republic sent their ace Veronika Pecková to the circle with Canada countering with Ruby Anderson (Victoria, B.C.). Both pitchers kept the opposition off the scoreboard over the first three innings, with Canada getting two walks in the bottom of the first, a two-out single by Janet Leung (Mississauga, Ont.) in the second and a one-out double by Victoria Hayward (Toronto, Ont.) in the third without being able to score. Anderson allowed a single in the second and a double in the fourth, but the batter was thrown out after being caught trying to stretch her hit into a triple.

Polidori led off the bottom of the fourth by hitting a 3-0 pitch over the left field fence for a homerun. Alysen Febrey (Peachtree City, Ga.) followed with a double, but three strikeouts left her stranded. Nicola Simpson (Seattle, Wash.) relieved Anderson to start the fifth and the Czechs put two runners on base on an error and a walk but was unable to get on the board. In the bottom of the sixth, Canada loaded the bases with three walks, but a double play stopped them from adding to their lead. The Czech Republic put their first two batters on base with an error and a single to start the seventh, but Morgan Rackel (Calgary, Alta.) got a double play right back to her and induced a fly ball to third to end the game.

Anderson picked up the win, holding the Czech to only two hits and striking out two over four innings. Simpson struck out one in an inning of relief, while Rackel closed the game allowing one hit and striking one out over the last two innings. Polidori’s homerun was the difference in the game, with Febrey and Hayward each hitting a double and Leung adding a single.

In the second game, the first inning was scoreless but both teams got on the board in the second, The Czechs struck first, getting back-to-back singles with one out and scoring a run on a double to left by Ema Vodičková. Canada responded by loading the bases with singles by Leung and Grace Messmer (Surrey, B.C.) and a hit by pitch by Emma Entzminger (Victoria, B.C.), with two runs scoring on an error by the second baseman followed by a two-run double to left by Natalie Wideman (Mississauga, Ont.) to make the score 4-1.

Two innings later, Canada’s bats went back to work. Messmer led off with a triple to the right field corner and scored on a sacrifice fly to right by Lauren Benson (Surrey, B.C.). Wideman followed with a double and Polidori drew a walk, with both coming in to score on a double by Madelyn McKinnon (Surrey, B.C.) who advanced to third on a throw. Callum Pilgrim (Abbotsford, B.C.) brought McKinnon in to score with a single to right to make the score 8-1. The Czechs went down in order in the top of the fifth to end the game on the run rule.

Rackel started the game for Canada and allowed one run on three hits over three innings before giving way to Jorde Chartrand (Weyburn, Sask.) who allowed only one hit in two innings of relief. Messmer was named player of the game with a triple, a single and two runs scored, with Wideman hitting two doubles and driving in two runs and McKinnon delivering a two-run double. Pilgrim and Leung each singled, while Benson drove in three runs.

Team Canada will now travel to Bradenton, Fla. to prepare for The World Games that will be held July 9-13 in Birmingham, Ala. The red and white is scheduled to play the Florida Vibe professional softball team for a doubleheader at 3:00pm and 5:00pm EDT on Sunday, July 3 followed by a single game at 1:00pm EDT on Monday, July 4.

The Czech Republic will continue their preparations for the upcoming 21-team European Softball Championship that will be played July 24-30 in Spain.