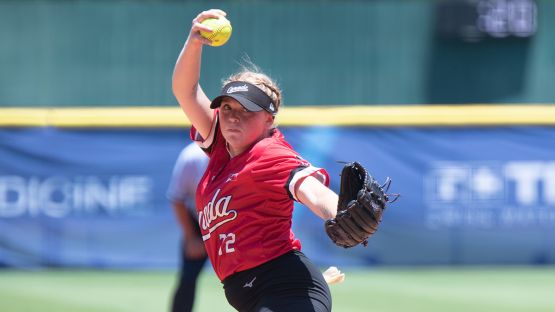 Puerto Rico scored the only run in the game early in the top of the first inning, when Ocasio led off with a double to right, advanced to third by tagging up on a fly ball to center and scoring on a two-out double by Carla Claudio. Kelsey Harshman (Delta, B.C.) worked a one-out walk in the bottom of the frame and moved up to second on a passed ball, but a strikeout and line out left her stranded at second.

After a quick second inning, Victoria Hayward (Toronto, Ont.) hit a two-out single to right in the bottom of the third and stole second, but a strikeout ended the inning. Puerto Rico put two runners on base with a single and an intentional walk in the fourth but a great double play by Canada kept the game at 1-0. Harshman drilled a one-out double in the bottom of the sixth, but that was followed by a strikeout and a fielder’s choice to keep Canada off the scoreboard. Erika Polidori (Brantford, Ont.) forced a one-out walk in the bottom of the seventh before Ocasio induced a game-ending double play as Puerto Rico earned the hard-fought win.

Chartrand allowed one run on three hits and two walks while striking out three in four innings for Canada, while Simpson allowed two hits and struck out one in three innings of relief. Harshman and Hayward each had a hit for Canada, as Ocasio pitched the full seven innings striking out four batters.

Playoff results on Tuesday saw Puerto Rico beat Italy 7-0 to advanced to the fifth-place game, while Japan and the United States earned berths to the gold medal game with 7-0 and 5-0 wins over Chinese Taipei and Australia respectively.

The next planned event for the Women’s National Team program is a WBSC Americas Pan American Championship that is scheduled to be played in November in a yet to be determined location. The event will be a qualifier for the XVII WBSC Women’s Softball World Cup Group Stage that will be played in 2023.