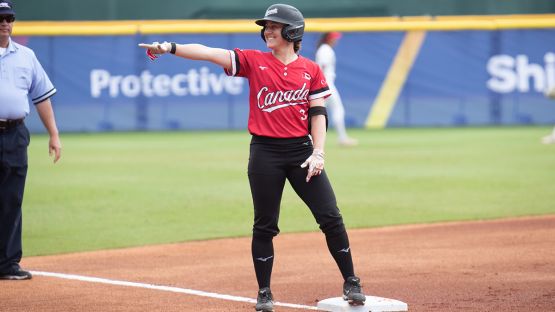 Birmingham, Ala. – The Canadian Women’s National Softball Team will play in the fifth-place game on Wednesday after defeating Mexico 8-1 in six innings at Hoover Met Stadium on Tuesday morning. Canada’s offence scored five runs in the bottom of the first and the pitching tandem of Morgan Rackel (Calgary, Alta.) and Ruby Anderson (Victoria, B.C.) limited Mexico to only three hits in the run rule victory.

Mexico opened the scoring with a solo homerun in the top of the first inning, but Canada came storming back with five runs in the bottom of the frame. Victoria Hayward (Toronto, Ont.) led off with an infield single, stole second and scored on an error after a single by Kelsey Harshman (Delta, B.C.). After a walk to Kianna Jones (Cloverdale, B.C.), Harshman crossed the plate on a single by Larissa Franklin (Maple Ridge, B.C.) followed by a two-run double to left by Erika Polidori (Brantford, Ont.), who went on to score on a wild pitch to give Canada a 5-1 lead after one inning.

Canada added to its lead in the bottom of the third inning, as Janet Leung (Mississauga, Ont.) drew a one-out walk and scored on an error after a single by Natalie Wideman (Mississauga, Ont.). Hayward followed up with a single of her own to score Wideman and extend Canada’s lead to 7-1. The score remained the same until the bottom of the sixth, when Harshman was hit by a pitch, moved up to second on a ground out and to third on a wild pitch before scoring on a single to left by Franklin to end the game on the run rule.

Rackel picked up the win, allowing one run on two hits with two strikeouts in three innings of work before Anderson pitched the final three inning, allowing only one hit. Hayward led Canada at the plate from the leadoff spot, hitting three singles, driving in a run and scoring once. Polidori delivered with a two-run double, while Franklin singled twice and drove in two runs. Harshman, Wideman and Kelsey Lalor (Red Deer, Alta.) each added a single.

With the win, Canada advanced to the fifth-place game at 1:00pm CDT on Wednesday and will take on the winner of the game between Puerto Rico and Italy that is currently underway.