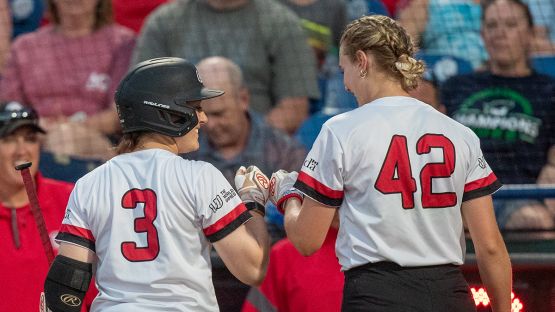 Birmingham, Ala. – The Canadian Women’s National Softball Team was defeated by the United States 10-2 in five innings at Hoover Met Stadium on Monday night. The loss eliminated Team Canada (1-2) from the medal round, and they will now face Mexico (0-3) in the consolation round at 10:00am CDT on Tuesday with the winner of that game moving on to play in the fifth-place game on Wednesday.

After a scoreless first inning, the United States opened the scoring with a two-run single by Dejah Mulipola in the bottom of the second, then added three more runs in the third on a run-scoring single, a hit by pitch with the bases loaded and a fielder’s choice to take a 5-0 lead. Canada got some life back in the top of the fourth when Kelsey Harshman (Delta, B.C.) led off with a single and scored on a two-run homerun to left by Kianna Jones (Cloverdale, B.C.).

However, the Americans went back to work in the bottom of the inning, scoring five runs on the strength of a pair of two-run homeruns and an RBI double. Canada couldn’t get anything going in the top of the fifth as the game ended on the run-ahead rule.

Morgan Rackel (Calgary, Alta.) started the game in the circle for Canada, allowing five runs on five hits with two strikeouts in two innings and a third, while Jorde Chartrand (Weyburn, Sask.) allowed three runs on one hit and a strikeout in an inning and a third. Nicola Simpson (Seattle, Wash.) got the final out, but allowed two runs on two hits. The homerun by Jones and the single by Harshman in the fourth were Canada’s only hits.