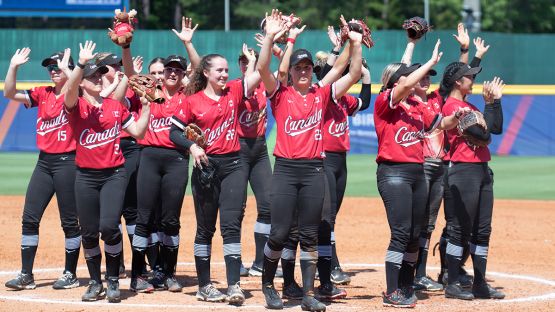 Birmingham, Ala. – The Canadian Women’s National Softball Team evened their record to 1-1 with a 10-4 win over Italy at Hoover Met Stadium on Sunday afternoon. The Canadian squad overcame an early 4-0 deficit and put the game away with a four-run sixth inning on route to the big win.

Italy wasted no time getting on the board early as the first batter of the game hit a homerun, with Giulia Longhi later hitting a two-run blast for a 3-0 lead after the top of the first. A run-scoring single by the Italians in the top of the second increased their lead to 4-0 before Canada came chipping away with three runs in the bottom of the frame. Erika Polidori (Brantford, Ont.) led off with a walk, stole second and scored on a single by Janet Leung (Mississauga, Ont.). Canada proceeded to load the bases with a single by Emma Entzminger (Victoria, B.C.) and a walk by Natalie Wideman (Mississauga, Ont.) before Leung scored on an illegal pitch, followed by a sacrifice fly to center by Victoria Hayward (Toronto, Ont.) to make the score 4-3.

Kianna Jones (Cloverdale, B.C.) led off the bottom half of the third with a double to center and advanced to third on an illegal pitch before Larissa Franklin (Maple Ridge, B.C.) was hit by a pitch and stole second to put runners on second and third. Alysen Febrey (Peachtree City, Ga.) stepped up and delivered with a two-run single center with two outs to give Canada a 5-4 lead. The following inning, Hayward tripled to right and scored on a single by Kelsey Harshman (Delta, B.C.) to add an insurance run to Canada’s lead.

After a scoreless fifth, Canada put the game out of reach with four runs in the bottom of the sixth. Leung was hit by a pitch to start the inning and advanced to third after a fielder’s choice was thrown away at second. Wideman delivered an RBI single to score Leung, with Entzminger scoring on a fielder’s choice on the next play. Harshman hit a run-scoring double center and later scored on a single by Franklin to make the score 10-4. Italy managed a one-out single off reliever Nicola Simpson (Seattle, Wash.) in the seventh, but a strikeout and a fly out ended the game.

Ruby Anderson (Victoria, B.C.) started the game in the pitcher’s circle and allowed four runs (three earned) on four hits, striking out two batters over an inning and two thirds. Simpson relieved her in the second inning and earned the win, limiting Italy to only two hits and striking out four in five innings and a third. Hayward tripled, singled and drove in a run for Canada with Harshman adding a double, a single and two runs batted in, while Franklin singled twice and drove in one. Febrey contributed a two-run single, and Leung and Wideman each singled and drove in a run as well. Jones doubled and Entzminger registered a single.