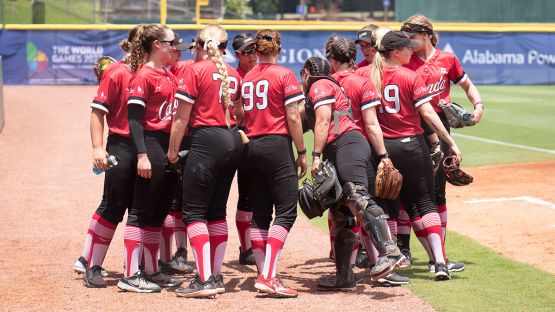 Birmingham, Ala. – The Canadian Women’s National Softball Team began The World Games 2022 with a 9-4 loss to Chinese Taipei at the Hoover Met Softball Stadium on Saturday. The Taipei hitters put plenty of pressure on the Canadian defence, while Canada’s bats were able to put runners on base but wasn’t able to get the key hits at the right moments.

Taipei opened the scoring in the top of the first when the second batter of the game singled, was sacrificed to second and scored on a two-out double. Team Canada responded with two runs in the bottom of the second, when Kianna Jones (Cloverdale, B.C.) and Erika Polidori (Brantford, Ont.) connected with back-to-back homeruns to give Canada a 2-1 lead. However, Taipei went back to work by scoring four runs in the top of the third with a run-scoring single, an RBI double and a two-run singles.

Canada got one run back in the bottom of the third when Larissa Franklin (Maple Ridge, B.C.) hit a one-out double to right and later scored on a single to left by Jones to make the score 5-3. Once again, Chinese Taipei replied by scoring two runs on back-to-back hits to increase their lead. In the bottom of the frame, Janet Leung (Mississauga, Ont.) led off with a single, but she was retired on a fielder’s choice by Emma Entzminger (Victoria, B.C.), who later scored when a throw to second on a steal attempt was overthrown by the catcher to make the score 7-4.

In the top of the fifth, Taipei got a two-out hit by pitch followed by a run-scoring triple, with the batter also crossing the plate on an error in right to make the score 9-4. The red and white looked poised to close the gap in the bottom of the sixth, with Entzminger drawing a leadoff walk followed by a single by Kelsey Lalor (Red Deer, Alta.). However, three ground balls kept Canada from scoring. Canada went down in order in the bottom of the seventh.

Jorde Chartrand (Weyburn, Sask.) started the game in the circle for Canada and allowed five runs on seven hits with one strikeout in two innings and two thirds. Morgan Rackel (Calgary, Alta.) relieved Chartrand in the third, yielding four runs (three earned) on five hits while striking out two in two innings and a third. Nicola Simpson (Seattle, Wash.) held Taipei to one hit in two innings of work. Jones led Canada at the plate by going three-for-four with a homerun, two singles and two runs batted in. Polidori hit a homerun, Franklin doubled, Leung singled twice and Entzminger and Lalor each chipped in with a single.

Canada (0-1) will face Italy at 1:00pm CDT in their next game on Sunday afternoon. Tournaments stats and results are available through The World Games website at https://twg2022.com/results.