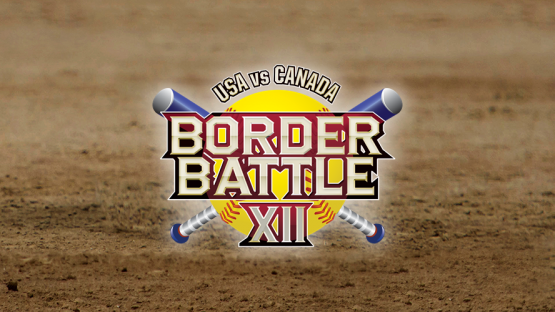 Oklahoma City, Okla. – The Canadian Men’s and Women’s Slo-Pitch teams both came out on the losing end of their respective Border Battle matchups against the United States, with the Women losing 11-4 after a 10-run fifth inning by the Americans, while the Men battled back from a 21-0 deficit but fell 28-8.

The Canadian Women’s squad came into the Border Battle with some confidence after going 3-1 in exhibition action over the first two days, defeating club teams the Scraps 17-0, Tolbert’s All-Stars 15-12 and JMI Sports 21-11 but dropping a tight 6-5 decision to the USA Futures. In the Border Battle game, USA opened the scoring with a run in the bottom of the first inning, but Canada responded with one in the top of the second when Jacqueline O’Quinn (Toronto, Ont.) doubled to center and scored on a single by Shannon Hilton (Orillia, Ont.). Canada’s pitching and defence held strong against the American squad, holding them off the scoreboard in the second, third and fourth inning with Team Canada taking a 3-1 lead in the top of the fourth on a two-run double to right by Hilton to score Jesse Goddard (Langley, B.C.) and Kait Kloet (Simcoe, Ont.) who both singled earlier in the inning.

However, the Team USA bats got going and started to find the holes in the bottom of the fifth, getting a leadoff homerun followed by a string of four singles and two doubles to take a 6-3 lead before Canada got two outs on lineouts. Two more singles and two doubles added five runs to the USA lead to make it 11-3. Canada added one more run in the top of the sixth when Shelby Lia (Oshawa, Ont.) doubled over the right fielder and scored on a single by O’Quinn. Canada got a leadoff single by Hilton to start the seventh but was unable to get anything else going.

Hilton led Canada offensively by going 3-for-3 with a double and three runs batted in, with O’Quinn hitting a double and a single and driving in one. Lia contributed with a double, while Lenny Stoddart (Bolton, Ont.) singled twice and Goddard, Kloet and Melanie Gulbransen (Aldergrove, B.C.) each singled once. Michelle Lorenz (Toronto, Ont.) pitched the game for Canada and held USA down until the big fifth inning, taking the loss by allowing 11 runs on 14 hits over five innings and two third. Marnie Scow (Vancouver, B.C.) pitched the last inning and a third, holding USA to no runs and two hits.

The Men’s team went 1-3 in their exhibition schedule, losing two great games to T’s 13 by scores of 24-20 and 25-24 before defeating them 20-8 on Sunday morning after their Saturday evening game was postponed due to weather. The Canadian squad also dropped a 24-9 decision to the USA Futures on Saturday. In the Border Battle game, the United States held Canada scoreless for three innings while piling on eight runs in the first, five in the second and eight more in the third to take a big 21-0 lead. The red and white responded with an eight-run inning of their own in the top of the fourth. Hunter Platten (Edmonton, Alta.) led off with a single and scored on a homerun by Steve Rempel (Coaldale, Alta.) to get Canada on the board, followed by a single by Ryan Gates (London, Ont.) and a two-run blast to right by Jeff Andrews (St. Albert, Alta.).

After two quick outs, Canada got a single by Ren Visser (Squamish, B.C.) and pinch runner Jon Neuberger (Weyburn, Sask.) scored on a double by Shaun Gilchrist (Lethbridge, Alta.) before Kyle Knechtel (Ayr, Ont.) connected with a two-run homerun to left. Justin Pennell (Toronto, Ont.) followed with a double and crossed the plate on a single by Platten to pull Canada closer at 21-8. However, the United States scored seven runs on the strength of five homeruns to end the game on the run rule in the bottom of the fourth.

Jeff Andrews, Knechtel and Rempel each had a homerun for Canada with Pennell and Visser each contributing with a double and a single. Platten singled twice, with Gilchrist adding a double and Gates registering a single. Kyle Reinders (Cambridge, Ont.) and Gilchrist shared the pitching duties in the loss.