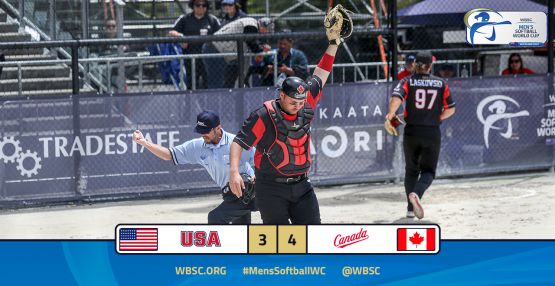 Auckland, New Zealand – The Canadian Men’s National Softball Team overcame an early 3-0 deficit to defeat the United States 4-3 in a thrilling ball game in the Super Round of the WBSC World Cup.

Canada seemed poised to open the scoring with a hit by pitch and a single by Mathieu Roy (St-Gervais, Que.) to start the bottom of the first, but a double play stopped that momentum. In the top of the second, USA put two runners on with a walk and a single before Cam Schiller hit a three-run home run to center. Canada got a lead off single by Quinten Bruce (Grand Valley, Ont.) in the bottom of the inning, but another double play kept Canada off the board.

The United States tried to extend their lead in the third with a runner being tagged out at home trying to score from second on a chopper to second, while Canada also had a runner thrown out at the plate on a double to the right-center field gap by Shane Boland (St. John’s, N.L.).

Canada got back in the game by scoring two runs in the bottom of the fourth. Bradley Ezekiel (Harbour Main, N.L.) started the rally’s with a single to center with Bruce drawing a walk before Bryan Abrey (Richmond, B.C.) singled to right to score Ezekiel and advance Bruce to third, who then scored on a ground out to cut the lead to one. Shane Boland hit a home run the following inning to tie the game, and Canada took the lead in the bottom of the sixth when Bruce led off with a single and scored from first on a double to center by Abrey.

The United States put plenty of pressure in the top of the seventh, loading the bases with a walk and two singles but Justin Schofield (Grand Pre, N.S.) notched a pair of strikeouts and the game ended when a batter deliberately stuck his elbow out on a hit by pitch near the strike zone.

Sean Cleary (Harbour Main, N.L.) started the game in the pitcher’s circle and allowed three runs on on five hits with eight strikeouts over five innings, with Schofield picking up the late inning win allowing two hits and striking out five batters in two innings of relief. Shane Boland led Canada offensively with a home run and a double while Abrey doubled and singled while driving in two runs. Bruce added a pair of singles with Roy and Ezekiel each registered one.

The win improved Canada’s record to 3-0 in the Super Round while the United States fell to 1-2. Canada’s next game will be against Argentina (3-0) at 4:30pm NZDT on Friday (10:30pm EST Thursday). Streaming is available at gametime.sport, with live scoring available on the World Cup website.