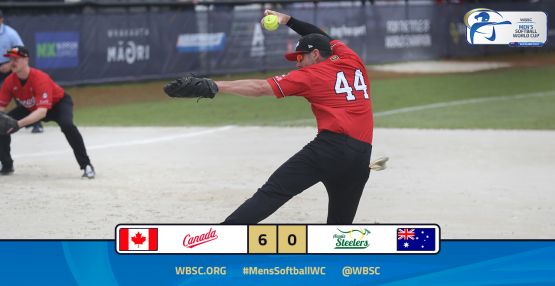 Auckland, New Zealand – The Canadian Men’s National Team banked a key 6-0 win against Australia to guarantee a spot in the Super Round with one game left in the preliminary round. Derek Mayson (North Vancouver, B.C.) had a stellar game at the plate with a pair of home runs and a double, while Sean Cleary (Harbour Main, N.L.) earned the shutout in the pitcher’s circle allowing only two hits.

Both teams came into the game undefeated at 3-0 to share the lead at the top of Pool B. After Canada was retired in order in the top of the first, Australia got a one-out triple by Callum Beashel but Cleary left him stranded with a pair of big strikeouts. Mayson led off the second by taking an 0-2 pitch over the left field fence for a solo home run, then in the third Bradley Ezekiel (Harbour Main, N.L.) drew a two-out walk and scored from first on a double to the left-centre field gap by Mayson.

After the triple by Beashel, Cleary retired 12 straight batters before Josh White hit a one-out single in the bottom of the fifth, with Cleary inducing a ground ball back to him and notching another strikeout to keep the Aussies off the board. Mayson led off the top of the sixth with another solo shot to left to make it 3-0, then Quinten Bruce (Grand Valley, Ont.) followed with single and crossed the plate on a triple by Bryan Abrey (Richmond, B.C.). Later in the inning, Justin Laskowski (Warman, Sask.) dropped a single into short left field to score Abrey.

Canada added another run in the top of the seventh when Mathieu Roy (St-Gervais, Que.) led off with a single and later scored on a single by Abrey. Cleary struck out the side in the bottom of the seventh to seal the win.

Cleary earned the complete game shutout, allowing only two hits and striking out 11 batters over seven innings. Mayson went 3-for-4 with two home runs, a double and three runs batted in, with Abrey adding a triple and a single and drove in two. Bruce singled twice and Roy and Laskowski each added a hit.

The win gave Canada sole position of first place in Pool B with a 4-0 record, while Australia dropped to 3-1. Canada will play its final preliminary round against Japan (2-2) at 4:30pm NZDT on Wednesday (10:30pm EST Tuesday).