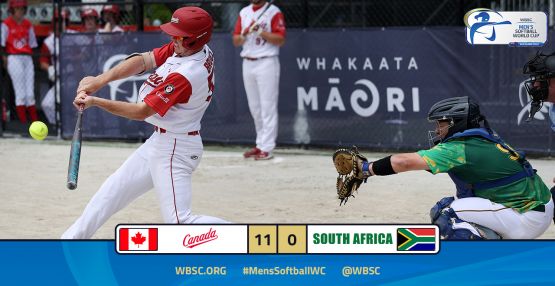 Canada opened the scoring in the top of the first inning when Quinten Bruce (Grand Valley, Ont.) tripled to the left field corner and scored on a wild pitch. Sebastian walked a batter and struck out three in the bottom of the first before Canada put up four runs in the second. Colin Walsh (Petty Harbour, N.L.) started the inning with a solo homerun to left, followed by a single by Cory Jones (Leduc, Alta.) who later scored on an error. Shane Boland (St. John’s, N.L.) and Justin Laskowski (Warman, Sask.) each added run-scoring singles to make the score 5-0.

Sebastian struck out the side again in the bottom of the second, with Canada adding two more runs on an RBI double to the right-center field gap by Ryan Boland (St. John’s, N.L.) and a throwing error by the pitcher. Canada put the game away by scoring four runs in the top of the fifth, loading the bases with three walks before Laskowski delivered a two-run double to right followed by a two-run single to left by Derek Mayson (North Vancouver, B.C.). Sebastian closed out the game with a ground out and two more strikeouts in the bottom of the fifth.

Sebastian issued only two walks and struck out 12 batters in his five-inning no-hitter. Laskowski drove in three runs with a double and a single, Walsh delivered a homerun, Mayson singled twice and had two runs batted in, and Ryan Boland added an RBI double. Bruce contributed with a triple with Shane Boland and Jones each adding a single.

Canada (3-0) will face Australia (2-0) at 1:30pm NZDT Tuesday (7:30pm EST on Monday). Streaming is available at gametime.sport, with live scoring available on the World Cup website.