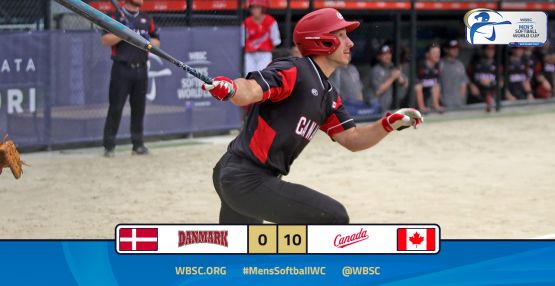 Auckland, New Zealand – The Canadian Men’s National Team defeated Denmark 10-0 in four innings in a game that went through a lengthy rain delay. The bats smashed four home runs including three after the rain delay to end the game on the run rule, while Zach Pierce (Saskatoon, Sask.) held Denmark to only one hit.

Pierce induced three ground outs in the top of the first before Canada opened the scoring in the bottom of the first. Shane Boland (St. John’s, N.L.) led off with a triple to left and immediately scored on a sacrifice fly by Mathieu Roy (St-Gervais, Que.). Later in the inning, Derek Mayson (North Vancouver, B.C.) lined a single to centre and crossed the plate on a triple to the left field corner by Quinten Bruce (Grand Valley, Ont.). Denmark got a lead off single in the second, but the runner was quickly retired on a double play.

In the bottom of the second, Shane Boland drilled a single off the third baseman’s glove and came in to score when Roy lined a two-run home run to right. Pierce struck out the side in the third, and Canada put two runners on base on a triple to right-center by Ty Sebastian (Brussels, Ont.) and a walk before heavy rain forced a rain delay.

Once play resumed, Pierced retired Denmark on three more ground outs before Canada put the game away with six runs all with two outs. Bradley Ezekiel (Harbour Main, N.L.) started with a two-out walk followed by a single by Mayson before Bruce hit a three-run blast to left, the first home run of his career with Team Canada. Bryan Abrey (Richmond, B.C.) followed with a solo shot, and after Sebastian walked, Colin Walsh (Petty Harbour, N.L.) ended the game with a two-run home run.

Pierce struck out three batters and allowed only one hit while facing the minimum over four innings to earn the win. Bruce led Canada offensively with a home run, a triple and four runs batted in, with Roy adding a home run and three RBIs and Walsh driving in two with a home run. Abrey hit a solo home run, Shane Boland and Mayson each singled twice and scored twice and Sebastian tripled.

Team Canada (2-0) will play South Africa (0-2) at noon NZDT on Monday (6:00pm EST on Sunday). Streaming is available at gametime.sport, with live scoring available on the World Cup website.