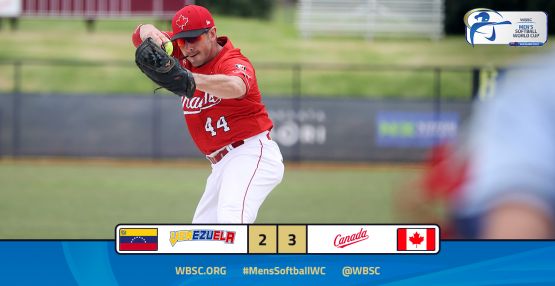 Auckland, New Zealand – The Canadian Men’s National Team opened its 2022 WBSC Men’s Softball World Cup schedule with a 3-2 win over Venezuela. The red and white jumped out to an early 3-0 lead in the bottom of the first and the pitching was able to hold strong for the tight victory.

Sean Cleary (Harbour Main, N.L.) got the ball in the pitcher’s circle for Canada, and after allowing a leadoff single, he struck out the next three batters, leaving the runner stranded at second. That fired up the Canadian offence, as Shane Boland (St. John’s, N.L.) and Mathieu Roy (St-Gervais, Que.) each drew walks before Bradley Ezekiel (Harbour Main, N.L.) lined a single to center to open the scoring. Quinten Bruce (Grand Valley, Ont.) dropped a single into shallow left field to bring in the second run, followed by a single off the second baseman’s glove by Bryan Abrey (Richmond, B.C.) to make the score 3-0.

Venezuela fought back in the top of the third, getting a pair of walks of their own later followed by a pair of two-out singles by Rafael Flores and Erwin Diaz to bring in two runs and cut the lead to 3-2. In the bottom of the frame, Canada got singles from Ezekiel and Derek Mayson (North Vancouver, B.C.) but an inning-ending double play kept them from adding to their lead. Cleary retired Venezuela in order in the fourth and struck out 10 batters over four innings before giving way to Justin Schofield (Grand Pre, N.S.) to start the fifth, who retired Venezuela in order in each of the fifth and sixth innings.

Venezuela put some pressure on in the top of the seventh, getting a one-out single by Rogelio Sequera but Schofield notched a pair of big strikeouts to end the game.

Cleary allowed two runs on three hits and struck out 10 batters in four innings, with Schofield allowing only one it and striking out seven over three innings of relief for the save. Ezekiel and Bruce each singled twice and drove in a run, with Abrey adding a run-scoring single and Roy chipping in with a hit as well.

Canada (1-0) will return to action against Denmark (0-1) at noon NZDT on Sunday (6:00pm EST on Saturday). Streaming is available at gametime.sport, with live scoring available on the World Cup website.