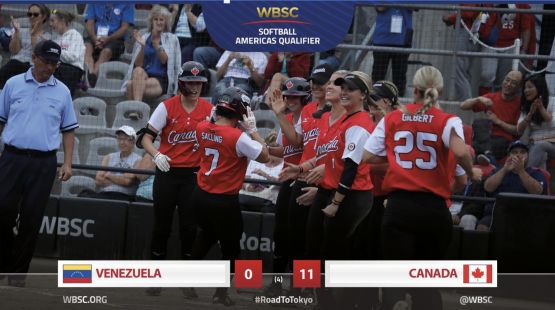 Surrey, B.C. – Canada’s Women’s National Team remains undefeated at the WBSC Softball Americas Qualifier with a 11-0 victory over Venezuela in their first game of the Super Round on Friday night at Softball City. With the win, Canada improved to 3-0 in the Super Round standings.

Jennifer Salling (Port Coquitlam, B.C.) continued her red-hot hitting streak with two more hits in the contest to bring her total at the event to eight, and her two runs batted in bumped her up to eleven, which leads the tournament. Jennifer Gilbert (Saskatoon, Sask.) is right behind her with nine, and Kaleigh Rafter (Guelph, Ont.) rounds out the top three with seven.

Team Canada went to work early by scoring five runs on five hits in the bottom of the first inning. Canada’s first baserunner came on a walk by Kelsey Jenkins (Delta, B.C.), who moved up to third on a single by Gilbert and scored when Holly Speers (Surrey, B.C.) singled to left. After Speers scored on a single by Salling, Rafter followed with a two-run homerun halfway up the bleachers in center field to make it 5-0 for Canada.

Canada added to their lead with a pair of runs in the second. Victoria Hayward (Toronto, Ont.) led off the inning with a single down the first base line and was doubled home by Jenkins. With two outs in the inning, Salling smacked a single up the middle to plate Jenkins for the second run in the frame.

In the third, Jenkins smoked a single past first base to score Emma Entzminger (Victoria, B.C.) who had led off the inning with a single and moving Hayward to third in the process. Gilbert followed up and wasted no time blasting a three-run home run over the center field fence.

It was another strong outing from Danielle Lawrie (Langley, B.C.) in the pitcher’s circle, as she went the full four innings for Canada and only allowed one hit, the first hit she’s allowed all tournament, while striking out four in the victory.

Canada (3-0) will look to keep their unbeaten streak alive when they take on Mexico (3-0) on Saturday afternoon at 1:00pm PDT (4:00pm EDT). The game will be broadcasted live on CBC Television.
Share: