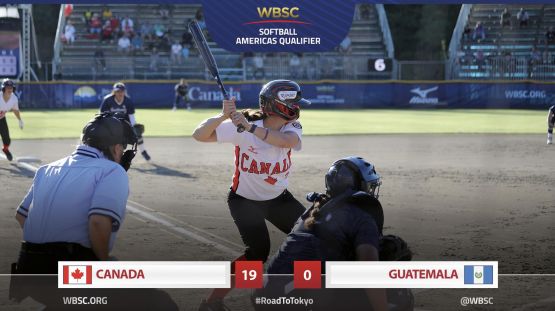 Surrey, B.C. – The Canadian Women’s National Team kept their hot bats swinging and stayed perfect at the 2019 Softball Americas Qualifier with a four-inning 19-0 victory over Guatemala on Tuesday evening.

Canadian pitchers combined for a four-inning perfect game, starting with Danielle Lawrie (Langley, B.C.) who went two and two thirds innings with seven strikeouts. She was replaced by Jenna Caira (Toronto, Ont.) who earned the final four outs of the game without allowing a hit and registering one strikeout.

Victoria Hayward (Toronto, Ont.) led off the game with a bunt single, stole second and promptly came in to score on a homerun to center by Kelsey Jenkins (Delta, B.C.). Consecutive singles by Holly Speers (Surrey, B.C.) and Jennifer Salling (Port Coquitlam, B.C.) and a walk by Erika Polidori (Brantford, Ont.) loaded the bases. After a fielder’s choice retired the lead runner at home, Janet Leung (Mississauga, Ont.) hit a two-run single to center to make it 4-0. Natalie Wideman (Mississauga, Ont.) was hit by a pitch, and in her second plate appearance of the inning, Hayward hammered an inside-the-park grand slam that dropped in front of the left fielder and rolled past her to round out the eight-run frame.

Leung earned her third RBI of the night in the second inning when she singled home Polidori from third for Canada ninth run.

Canada got back-to-back doubles to start the third when Jenkins got it started with double to straight away center, and was doubled home by Jennifer Gilbert (Saskatoon, Sask.) who banged one off the right field fence. Gilbert took third on a fly out by Salling, and scampered home for the second run of the inning when Polidori reached on an error.

In the final inning of the game, Leung led off with her third hit of the night, smacking a single through the right side. Wideman followed that hit up with a walk, and Hayward got her third hit of the night to score Leung. Another double by Jenkins, this time to left field, brought Wideman home and moved Hayward to third, who crossed the plate on a sacrifice fly by Gilbert. Salling doubled to score Jenkins and Speers, who had reached on a single down the first base line. With the bases loaded after a single by Lye, Leung drove in another run when she reached on a fielder’s choice. Wideman closed out the Canadian scoring when she singled up the middle, scoring Polidori from third.
Box  Score: Canada 19 vs. Guatemala 0

Canada improved its record to 3-0 after getting a forfeit win on Monday, as Argentina pulled out a few weeks before the tournament. The Canadian squad will face Puerto Rico (3-0) at 6:00pm PDT (9:00pm PDT) on Wednesday.
Share: