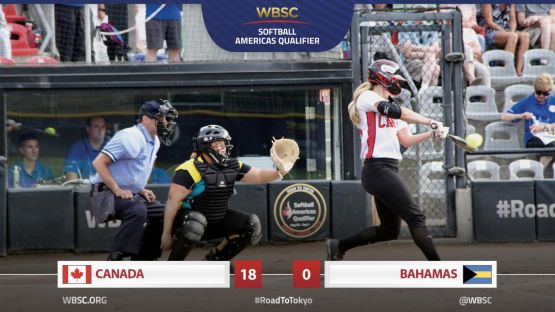 Surrey, B.C. – The Canadian Women’s National Team completed the opening round of the 2019 WBSC Softball Americas Qualifier with an 18-0 win over the Bahamas on Thursday night. Canada will now advance to the Super Round with a 2-0 record by virtue of beating Puerto Rico and Cuba – the two other Group A teams that will advance – in the opening round.

Canada did not waste any time getting on the scoreboard against the Bahamas by putting up four runs in the top of the first inning and used a ten run third to put the game totally out of reach.

Emma Entzminger (Victoria, B.C.) led off the game by hitting a single up the middle and stole second base. Holly Speers (Surrey, B.C.) was hit by a pitch to put two runners on base before Erika Polidori (Brantford, Ont.) drilled a double over the left fielder to push both runners in to score. A triple to the left-center field gap by Larissa Franklin (Maple Ridge, B.C.) scored Polidori, with Franklin crossing the plate on a wild pitch to give Canada a 4-0 lead.

After a scoreless second, Franklin hit a one-out single in the third, stole second and scored on a single by Janet Leung (Mississauga, Ont.). A double by Joey Lye (Toronto, Ont.) put runners on second and third and Natalie Wideman (Mississauga, Ont.) smacked a two-run single up the middle to score them both. A hit by pitch and a walk loaded the bases and another walk forced a run home before Jennifer Salling (Port Coquitlam, B.C.) hit a two-run single to center to increase the lead to 10-0. Polidori hit an RBI double to left followed by a two-run double by Franklin, who went on to score on a single by Leung to complete the ten run inning.

Jenkins was hit by a pitch to start the fourth followed by a single by Speers with both runners coming in to score on a double to right by Salling. Polidori’s third double of the game plated Salling and she later scored on an error to round out the scoring.

Jenna Caira (Toronto, Ont.) got the start for Canada, allowing only a single in the second and one walk while striking out eight in the four inning game.

Team Canada will play its first Super Round game against Venezuela at 6:00pm PDT on Friday.
Share: